Myth 1: Anything with a broken mouth piece is a snaffle.

This is one of my biggest pet peeves. I walk into a tack shop or look at an online store and I see leverage bits being advertised as “shanked snaffles.” There is no such thing as a shanked snaffle. There are shanked bits – also known as leverage bits or curb bits – and there are snaffles.

Snaffles are ring bits with no leverage, shanks or curb action. They often have broken mouthpieces. Leverage bits are any bit that has shanks that provide the leverage action which disqualifies it from being classified as a “snaffle.”

The confusion often comes because snaffles are often associated with broken mouthpieces. These mouthpieces have picked up the name “snaffle mouthpieces.” This term is a misnomer because it implies that any bit with that mouthpiece is a snaffle. But, in fact, any bit can have a broken mouthpiece and snaffles don’t have to be broken to be a snaffle. You can, indeed, get a ring snaffle with a port. They are rare, but they exist. Ring bit with ports are snaffles. Leverage bits with broken mouthpieces are curbs. “Shanked snaffles” are not a thing to anyone other than the marketers who saw that oxymoron as a way to sell more curbs to people who hate curbs and don’t want to use anything other than a snaffle.

Along the same vein, the infamous American tom thumb. Again, it’s got shanks, which is to say leverage. A tom thumb is a curb. Yes, it has a broken mouthpiece. Yes, your 4-H leader probably told you it’s a snaffle. This is probably the most infamous culprit of the “shanked snaffle” label. No, it’s not a snaffle. It will never be a snaffle. Stop calling it a snaffle.

If you read my explanation of leverage bits, you probably know where this is going. We’ve already thoroughly covered the fact that the American tom thumb is not a snaffle. Now that we’ve covered what it isn’t, let’s break down what it is.

If you look at the shanks, you will notice that the leverage ratio is approximately 2:1. That means that for every 1 pound of pressure that is applied to the reins, the horse feels 2 pounds of pressure on the bit. Tom thumbs also have a single jointed mouthpiece. If pressure is applied to both reins at the same time, the mouthpiece collapses and produces the legendary nutcracker effect. While this is not the harshest bit on the market, it’s not exactly a soft bit, and it’s certainly not a bit for inexperienced hands.

Myth 4: American tom thumb bits are the cruelest bit you can put in your horse’s mouth and you are abusive if you use one!

On the other hand, American tom thumb bits aren’t the cruelest bits out there either. Yes, they are often misused by beginning riders who have no business using them, but there are worse bits they could abuse, like these:

Tom thumbs have smooth mouthpieces that are quite thick, which makes them duller and less painful to the horse. While the nutcracker effect is still a problem and still amplified by the 2:1 leverage ratio, it is not near as severe as some of the other bits out there.

Leverage bits and ported bits are finely crafted tools that should only be used by experienced riders who know what they are doing and who have extensive training and preparation to handle such equipment. Leverage bits can be misused, but that does not make them inherently cruel. It is just as possible to abuse a smooth snaffle and even easier to abuse a mechanical hackamore. So, shame on those who knowingly misuse them and shame on the trainers who knowingly encourage riders who are not ready to handle a curb to use one. But, most horsemen who use curbs are not cruel, horse abusing monsters.

Myth 6: Single jointed bits are cruel due to the nutcracker effect.

Myth 7: The only humane way to ride a horse is bitless.

See that pointy protrusion at the nose? This is the part of the nose where most bitless bridles, including mechanical hackamores, sit. Look at how delicate that is. Now go pinch the cartilage of your own nose for a few seconds. Do that a couple of times in a row, let it sit for a few minutes, then pinch it a couple more times.

How long was your last ride? 1/2 hour? 1 hour? How sensitive would you nose be if you kept applying just 1 pound of pressure to the cartilage on your nose for 1 hour? Ow!

For a more detailed explanation, go back and read Friday’s post about bitless bridles, but I think you get the point. A well-fitted bit that is carefully selected for your horse’s need will always be better than messing with that tender cartilage on your horse’s nose.

Myth 8: All snaffles are soft bits. Snaffles cannot be cruel.

Most snaffles are soft bits (like the bits on the top and bottom of the image). But there are still some that should only be used by experienced hands, including thick or medium twisted wire mouthpieces. Then there are some that just shouldn’t be used by anyone including any type of chain mouth, corkscrew (middle image), thin or double twisted wire.

Myth 9: No bit is evil or cruel if the rider’s hands are soft.

For a lot of bits, it is true that the bit is only as harsh as the hands using them. But there are still some bits that still should not be used by even the most experienced of hands. These includes anything with a mouthpiece that is corkscrew, thin or double twisted wire. It also includes mechanical hackamores, combination hackamores, and any rigging attachments that are meant to force the horse into a headset rather than simply act as an aid to encourage the horse.

Myth 10: Every horse can go bitless.

My mare Moose is a prime example. Yeah, I can hop on her and ride her from the pasture to the barn with a halter and lead. If my bridle breaks on the trail, I can make it back home with a halter and lead. But, she gets very dull and sluggish. There is a distinct lack of communication without a bit. She also hates certain pressure points on her face being pressed. She hates hackamores, side pulls, and anything without a bit. There are more horses like her than you might think.

For those who have a horse that likes it, that’s great. Good for you. But understand that many horses just don’t respond well to bitless and will never perform to their fullest potential without a well-fitted bit in their mouth.

Alexi Mast is the one-woman army behind the Equestrian Writer Blog. As the author, editor, social media manager, SEO specialist, technical support, customer service agent, and just about everything else, she's built this blog from the ground up. She started the Equestrian Writer Blog as a way to share her 16 years of equestrian experience with her fellow amateur equestrians. Even through her battle with Epilepsy, she dedicates herself to helping others achieve their equestrian dreams. How do I ride inside leg to outside rein?1K Total Shares Why “Heels Down” Is Right Out741 Total Shares

Leg Yield: The Basis of All Lateral Movement688 Total Shares Top 20 Equestrian Blogs of 2018 by Horsemart 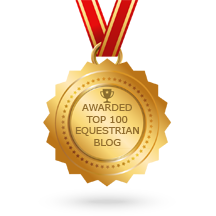